Opened in May of 2012, the Tower Cottage, is one we’re very proud of for its small environmental footprint and I wanted to write more in-depth about its green features.

It’s small, and thats a good thing :-). Small means doing more with less. For example fewer materials were used, but we used only the highest quality handmade tiles, stone, custom wrought iron, and hardwoods. The ‘slate’ tiles on the tower roof are actually made of the  virgin plastic waste left over after cutting out the leg holes from disposable diapers, keeping that material out of the waste stream.  And by cleverly using the space, it takes less energy to cool in summer and warm in winter while maintaining all the amenities and luxuries of a stay at the Stone Quarry House.

We sited the Tower among the trees to make use of their natural cooling effect. Putting the bedroom at the highest point of the structure naturally gathers the heat during colder months, while plenty of windows means a refreshing breeze during the summer as the tower functions as a chimney pulling cooler air through the building.

The Tower Cottage is powered by the solar arrays near the pond and at the top of the hill. These arrays produce more just a bit more electricity than we use at the Stone Quarry House.

But the most exciting green technology in the Tower is… wait for it… the toilet! It’s a waterless composting toilet and uses very interesting technology.  Guests add 1/2 cup of wood chips to the toilet instead of flushing.  A small fan keeps the air gently moving away from the bathroom as any odors are vented away from the cottage.

Waste passes to a sealed collecting/composting chamber in the basement which has two sections.  We aerate the ‘active’ section once a week or so with a crank on the outside of the chamber.  Once every couple of years, it is emptied into the second section below the first. [We haven’t had to do that yet, but it is supposed to be an easy task.]  After another couple of years one rakes out the fully composted material which we will use for our landscaping plantings and the orchard – though it should also be safe for the vegetable garden. 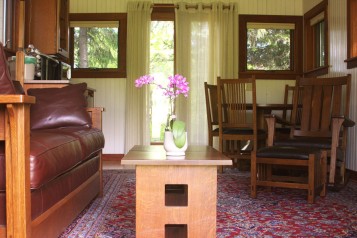 The Tower living room opens onto a deck in the woodland.

The Hilltop Suites is the best place to watch an Ithaca sunset! 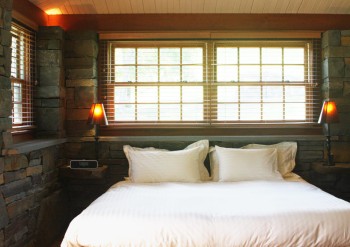 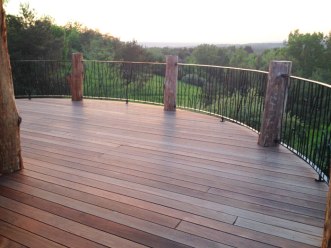 The Tower Apartment with its slate-clad cathedral ceiling and wrought-iron veranda. 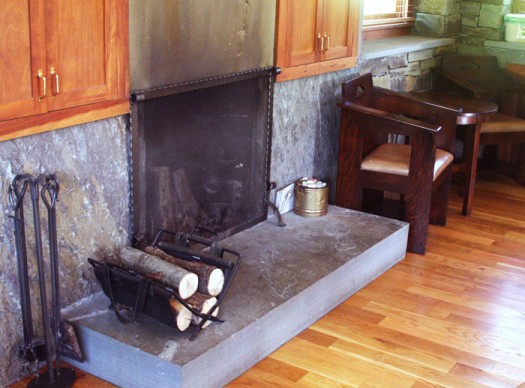